Just recently, in 2016 Summit has taken on a new partner:  Daniel Beard, Ellensburg WA, (Jennelle).   The Beard family is a long time stock contracting family that has produced many of the major rodeos in the northwest over the years.  Daniel brings both horses and bulls to the table. 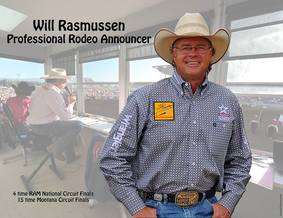 A smooth, easy-listening voice, solid knowledge of rodeo and a style that is both entertaining and informative are the mix of elements that make Will Rasmussen one of the Professional Rodeo Cowboys Association's most popular Rodeo Announcers.
Biography
With more than two decades of experience in the industry and a Wrangler and Ariat endorsee, Rasmussen is a veteran rodeo announcer who, since advancing to the PRCA ranks in 1994, has shared his style of announcing with rodeo fans in Montana and across the United States.
Definite Style. Rasmussen's trademark is his enthusiasm for the sport and his ability to involve the entire audience in each of the rodeo events. His commentary is down-to-earth, sprinkled with rodeo facts and trivia that make the show understandable and enjoyable for veteran fans and first-time enthusiasts. "I'm committed to getting the audience totally involved in every performance," he says.
His personal knowledge of the sport, sense of humor and timing blend together for a quality presentation that enhances the rodeo and satisfies the fans. "I guess it's my sense that you need more than just a rodeo," he says. "People want to be entertained."
Rasmussen is a fast thinker, who adjusts to the quicksilver changes of pace in the rodeo arena with humor and aplomb and is comfortable commenting on all facets of the sport.
Rodeoing Rasmussens. The Montana man's love of rodeo stems from his experience as the oldest child of the"Rodeoing Rasmussens," a family in which just about everyone was involved in the sport of rodeo. His mother is a timer and his father an experienced announcer. One brother is a competitor, while his youngest brother, Flint, is an 8x 'PRCA Clown of the Year.' Will's dad, Stan, helped him get started in the business. "He called me and told me he had scheduled two rodeos for the same weekend," Will says. "He needed me to bail him out." That was back in 1981 when Will drove to Gardiner, Montana, to announce the Upper Yellowstone Stampede. "I was deathly afraid, but it went pretty well," he recalls. Will's oldest son, Curt, ropes a little a occasionally hazes for youngest son, Quincy. Quincy is currently attending Montana Western in Dillon, MT, competing in three events for the Bulldogs' rodeo team. Second daughter, Casey, also competes in the summer.
In rodeo announcing, Rasmussen had found a way to blend his love of the rodeo industry and his skills as a radio announcer. At that time, he had become a popular Bozeman, Montana, Disc Jockey and later worked at a radio station in Shelby, Montana.
The thrill of announcing ... Since then, Rasmussen's interest in announcing has grown from a weekend hobby to a full-time career and he has found his place among the top announcers in his profession. While expanding his range and the variety of rodeos he has worked, Rasmussen has groomed his voice and skills to give rodeo-goers the best time they can have. "My job is not only to inform, but also to entertain. It is absolutely critical that paying people want to pay to come back next year," he says. Rasmussen says the thrill of announcing rodeos never gets old. "It's a great reward to have thousands of people respond positively to something that's happened and to know you helped that along," he says.
Back at the Ranch ... Will grew up in Choteau, Montana, raising horses and cattle on the family's place just outside of town, and was an outstanding high school football player and vocalist. After graduating from Choteau High School, he attended Montana State University in Bozeman. He used to coach high school basketball and now follows the school- and sports-related activities of his children--Curt, Kyla, Casey Jo, Quincy and Shamus. Will also has three grandchildren, Rylen, Reid and Trace.

Kevin Higley from Hooper, Utah has been coming to the Salmon Stampede since 2007.  A numerous Wilderness Circuit Clown of the Year, past bull fighter, and famous rodeo clown.  Kevin has worked the PRCA for many years.  He is a great ambassador to the sport of rodeo and always goes the extra mile to help rodeo committees and fans have a positive experience at the rodeo.  He has many acts, some with horses, some with his dogs, and some with just him!  Kevin and his wife Tammy travel all over the Wilderness Circuit and all over the united states performing his acts to thousands of fans each year.